A Holiday Story: I Am Going to Hell

This story was relayed to me by a very good friend last year (whom I miss dearly!), during the campaign hoopla of last fall's elections, Thanksgiving, Christmas – The Giving Season.

I held on to it, planning to post it to the blog and reread for when I need a pick-me-up.

Warning: You should make sure you don’t need to pee before you read it. Every time I read it, I almost pee my pants because I laugh so hard.

Here it is, for your enjoyment. Edited for anonymity.


"When [The Dog] finally decided she liked rawhide bones, we found out that she can't tolerate them. If she has a bone, she has diarrhea the next (early) morning. It's a real treat to wake up to that smell (she doesn't know how to ask to go out either).

So I wake up to a mess Saturday morning. I clean up the worst of it, throw everything into an old plastic [local grocery] sack, and toss it on the front porch to put in the garbage bin later (because I was still in my nightgown).

A couple of hours later, [The Mr.] and I are sitting in the living room drinking coffee (still in my nightgown). He notices something on the camera/security monitor (and it's not a political canvasser for a change).

He says, "That's weird. Some little kid just stole a sack of garbage off our porch and ran out and got in that white van."

I say, "Oh, shit! That's the Lutheran church picking up for their food drive!!!"
I had forgotten that Saturday was the day they were picking up the food they'd requested we put in a [local grocery] sack and leave on our front porches!

I was going to call the church and confess, but I couldn't talk about it without laughing hysterically.

So I guess I'm going to Hell."

The Summer of Fun, Friends and Festivities

The Summer of Wildlife

In addition to the weather, whales and our non-stop, non-sleeping summertime lifestyle, we had great wildlife sightings. So far, no bears, but the salmon are coming into the rivers and I expect to see some near rivers edge soon.

Here are some other wildlife photos:
>> Deer, puffins, eagle, buffalo, goats
Posted by KIA at 1:18 AM 1 comment: 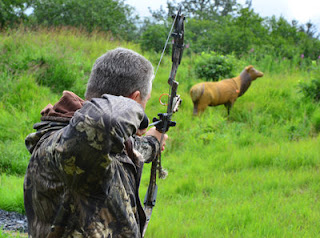 Robin has now made headline news for the FOURTH time in the two and a half years since we have lived in Kodiak.

A Whale of a Summer

This has been a whale of a summer, both literally and figuratively. 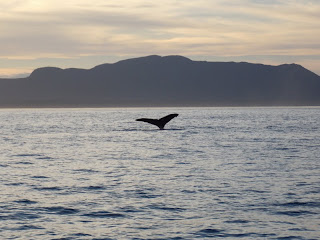 To start with, the weather has been phenomenal. In fact, it is the warmest and driest summer on record in more than 40 years. July was the warmest since 1979, and the driest since 1967. And, we had 18 consecutive dry days and 10 consecutive days with high temperatures above 70 degrees.

The whale action has been unprecedented. We haven't seen this many whales since our time at Glacier Bay. A mama and calf swam so close to the boat we were thinking about donning our gumby suits!

Needless to say, I have been outside enjoying this beautiful weather and beautiful place. Today, it's blowing and raining (for a change), so a good opportunity to update the long-neglected blog.

The primary hunt for this New Zealand trip was for red stag. It's an animal between a big deer and an elk in size. These are awesome creatures who "roar." It is a sound much louder and deeper than an elk bugling. An amazing sound to hear out in the wilds and remoteness of New Zealand. It really carries, too, and you can hear it from miles away -- literally.

We were about 1 1/2 hours from Blenheim, a total of 5 hours from Christchurch. In the middle of nothing. Lots of scruff, rugged and beautiful country with mountains, rivers, gorges, canyons and some steep, hot hiking. It's near Mount Gladstone, sort of.

The weather was perfect: blue skies, clear, crisp in the mornings but really heated up as the day went on to about 65 degrees. Which for us, seemed really freakin' hot. My pores were definitely cleaned out from all the sweating. Did I mention it was hot and steep?

We had spotted this fellow the night before, and were hoping he was still around. We were about to pack it up and head to another ridge, which I really did not want to do. (The sun was beating down and the climb was steep.) But, then I spotted him. I called attention to the guys ahead, and they got into position immediately. Good thing, too, because it all happened so fast.

Robin ranged him at 300 yards, set up and took the shot. Drilled him and down he went! We could hardly find the bullet hole -- that's how thick his hide was -- we had to find it from the inside. We also had to get through these prickly bushes, but all in all, he was pretty easy to reach.

He was around 450 pounds, and made really awesome burger!

See the photos from the red stag hunt.
Posted by KIA at 1:48 AM 2 comments:

Wow, what a stunningly beautiful place. Here are some of our hunting photos at Glen Dene station. If you're interested in a hunt at Glen Dene, talk to Robin first because we want to go back. Check out their website.

Our hosts Richard and Sarah Burdon were phenomenal and have a phenomenal station. They even had us for tea. What great people! She didn't even mind that Robin wanted to cook ... but who would? :-)

We camped at Lake Hawea Holiday Park. Boy, was that a beautiful, fun and friendly place to be. Well worth a stop if you ever go to the South Island.

Robin shot an arapawa ram at 225 yards. He is a cracker shot!

Sometimes pictures speak louder than words.
These should all make you smile or scratch your head ... or both.

Enjoy these photos.
Posted by KIA at 1:47 AM No comments:

While in New Zealand, we rented a campervan, the Lucky Cruiza.

What an awesome and amazing way to see the country. We drove about 1,400 miles in that thing, averaging around 30 miles to the gallon. We freedom camped (pulling over wherever we wanted). Tip for all you New Zealand bound campers: rent the porta-potty. This gives you "self-contained" status. Well worth having it along and opening up all these scenic, secluded opportunities to camp.

We also stayed in established campgrounds from time to time. These were great, and not like KOAs in the U.S. They were complete with showers, grills and laundry facilities. Of course, all in scenic places.

We were able to cook our meals, which is a significant savings. Eating out in New Zealand is very, very expensive. Although, they did have a great deal of gluten free options wherever we went.

Most of our meals were stag burgers or wild pork, all shot by Robin when we were hunting. We found a butcher along the way in a little town, who ground the stag into burger for us. It was awesome!

See some camping photos.
Posted by KIA at 1:10 AM No comments:

Wildlife in New Zealand was spectacular.
See a few -- and I do mean a few -- photos of wildlife.

What the ?!?@#? This was the response from the campervan rental agent . Exact change required, or they get to keep the change?
Posted by KIA at 4:22 PM No comments:

"Would you like ice cream in your milk shake?"


Server in response to Karen ordering a milk shake, which is really just flavored milk. If you add ice cream, it's $1 more and still just like flavored milk.
Posted by KIA at 4:11 PM No comments:

"You Americans. You're always asking for discounts."


Camp site representative in response to us asking about AAA or AARP discount.
Posted by KIA at 4:09 PM No comments:

In one week, we begin our journey to the Southern Hemisphere. I can hardly wait! We fly into Christchurch and will go on a 3-day hunt with New Zealand Trophy Hunting.

Then, some crazy fishing/diving adventure.

After that, we get in our Lucky Cruiza (campervan) and the real fun begins ... Driving on the wrong side of the road, camping who knows where, seeing penguins, and lots more adventure!

Stay tuned for updates and photos along the way.

"I'm not stubborn ... I just have good ideas. There's a big difference."


Robin's response when I said he was stubborn after his repeated refusals to have me start the truck so it could warm up.
Posted by KIA at 12:20 PM 2 comments:

Keeping busy with the USCG Auxiliary

Last year, we joined the USCG Auxiliary, which has been keeping us busy in the free time we didn't have.

We've been training to be boat crew members, which means we can go out on boat patrols and serve on USCG vessels. We were recruited to be Auxiliary "officers". I am the materials officer and Robin is a liaison officer.

See some photos of us in uniform!
Posted by KIA at 2:50 PM No comments:

A belated greeting for a healthy and happy New Year!

We had a great Christmas, having a wonderful meal with friends followed by a hike out Spruce Cape, one of our favorite walks.

See some photos.
Posted by KIA at 2:46 PM No comments: